This suggests that although SSH connections are being refused externally, they are possible via the proxy. In addition, another port is shown as open locally; possibly PostgreSQL.

In order to check if Apache was setup to serve an internal website if accessing via localhost, I setup FireFox to proxy via Squid and then compared the website being served via http://localhost over the proxy, and from http://10.2.0.104 externally. Both websites being served were the same, suggesting there was no vhost setup.

Entering a single quote into the e-mail field of the login form and submitting it revealed a MySQL error, revealing that the form is vulnerable to an SQL injection.

I tried a few different injections, all of which were returning syntax errors; as if characters were being removed.

Doing a bit more testing, I tried a UNION and added an invalid keyword at the start to widen the range of the query that is echoed back in the error message:

When submitting this, I saw that the commas between the fields were being removed as well as the SELECT keyword:

A similar test with the injection I was using to try and bypass authentication ('or'a'='a) revealed the same was happening with the OR operator, i.e. that it was being stripped out.

In case the operation handling the character stripping couldn’t handle null bytes, I used Burp’s repeater to insert a null byte prior to the injection and resubmitted, but it didn’t help escape the normalisation: 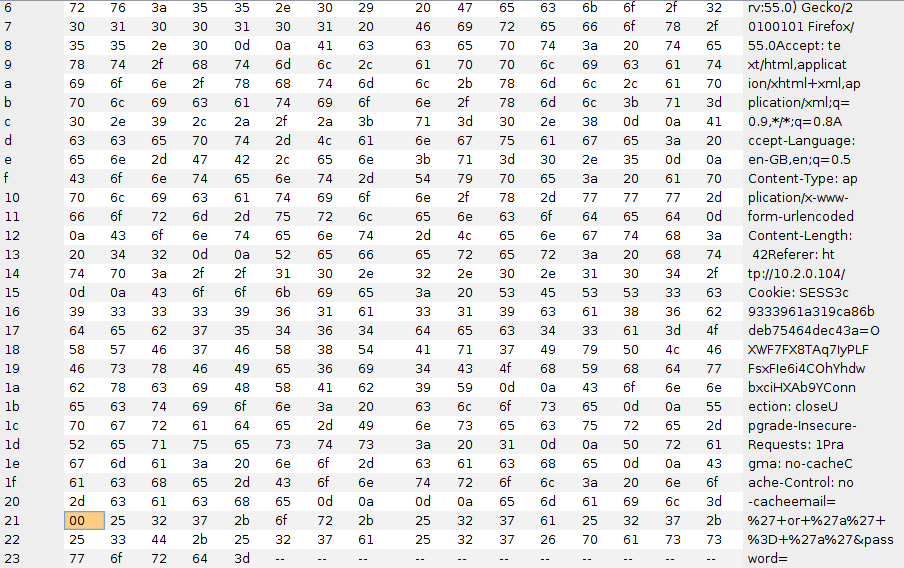 In addition, I also tried alternating the casing, in case the search pattern was case sensitive, but this also had no effect.

As there was seemingly no means of working around the character stripping, I tried replacing the OR operator with MySQL’s alternative operator (||) and found that it wasn’t in the blacklist, which allowed me to gain access by submitting a'||'a'='a'# as the e-mail. 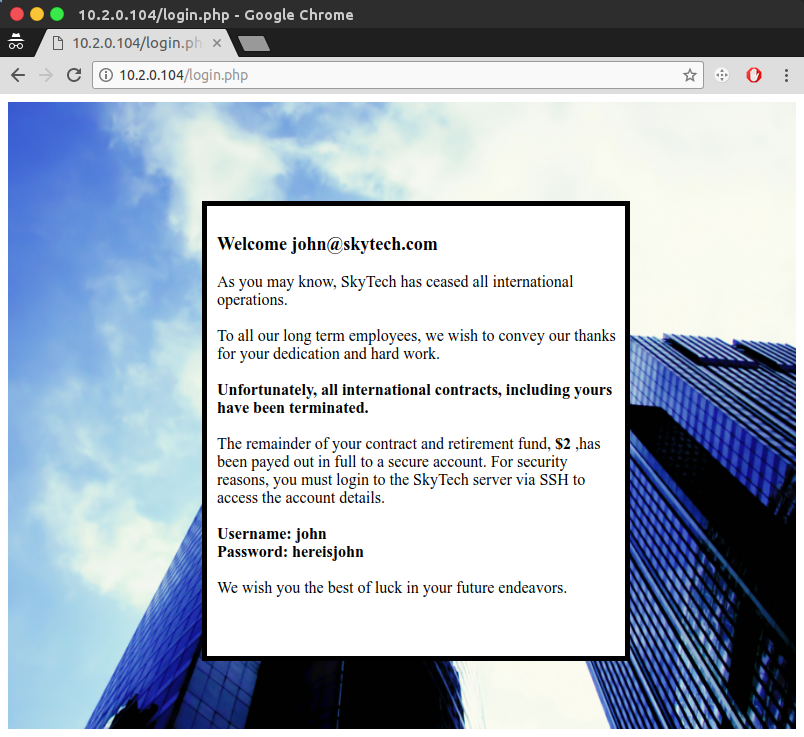 Using the SSH credentials found by bypassing the website’s authentication (john:hereisjohn), I configured proxychains to use the Squid server by adding http 10.2.0.104 3128 to the end of /etc/proxychains.conf and then accessed SSH through proxychains:

As can be seen in the output above, before being presented with a prompt, the session was automatically closed by the host. However, as it’s possible to specify a command to be automatically executed when using SSH, I was able to get a shell by connecting using proxychains ssh john@10.2.0.104 /bin/bash.

Listing the contents of /home reveals two other users that possibly exist on the website; sara and william:

Using the previously identified SQL injection with these usernames and the skytech.com domain that was revealed when using the initial SQL injection, I was able to modify it to extract their SSH credentials by using sara@skytech.com'# and william@skytech.com'# as the e-mail address in each request, which gave me the following credentials:

In order to try and harvest more credentials, I took a look at the contents of /var/www/login.php to find the MySQL credentials, which were revealed on line 3:

Once I had a slightly upgraded shell, I proceeded to enumerate the MySQL database to see what other credentials I could find, but there were no more users to be found:

A quick look at the Apache configuration in /etc/apache2/sites-enabled also confirmed my previous presumption that there was no vhost switching present:

Now that I had a few different sets of credentials at my disposal, I wanted to upgrade to an interactive shell and check out what sudo privileges each user had, to see if there was any low hanging fruit.

Usually, I’d do this using Python by running python -c 'import pty; pty.spawn("/bin/bash")', but Python wasn’t installed on the host; which meant I had to figure out what was killing the SSH connections.

I started [and finished] by looking in .bashrc and found the last three lines to read:

As I couldn’t use nano to edit the file, I used head to remove the last three lines and output it back into .bashrc:

After doing this, I tried to login again, and successfully got an interactive shell as john:

Now that I had the interactive shell, I ran sudo -l to view John’s privileges, but the account was unable to execute any commands using sudo, so I moved on to the sara account.

This account also had the same issue with being instantly disconnected, so I executed the same command as previously used on the john account (proxychains ssh sara@10.2.0.104 "head -n -3 .bashrc > .bashrc") and then connected with an interactive shell.

Once in, I found that the sara account had the ability to run cat /accounts/* and ls /accounts/*:

Both these commands allow for directory traversal, as .. can be used to get to the parent directory, which meant I was able to get the listing of /root and view the flag:

Now that I had the password for the root user, I was able to login as root and complete the challenge: