ReadMe is aiming to teach users about two things. One, a feature of MySQL that I have found to not be widely known about - which is that the client can be forced to send local files to the server. Two, some basic x86 assembly and analysis with gdb.

ReadMe is currently using DHCP on the ens33 interface. This can be configured using netplan.

Both these users can login via SSH (required as part of the challenge). Julian is not part of the sudo group but tatham is.

Initially, the user will be able to see three open ports:

The service listening on port 3306 is a Python script that accepts connections and mimics a MySQL server with remote authentication disabled. This is part rabbit-hole and part resource saver, given there is no need to have MySQL running.

On port 80, a web server can be found which needs to be brute forced to find some key files:

Upon visiting reminder.php, the user will see a message directed towards julian followed by an image which is being served from a directory with no index that also contains a file named creds.txt. This file will reveal the path to where julian’s login credentials can be found on the local file system (/etc/julian.txt).

With this information, the user can point adminer towards their own MySQL server in order to exfiltrate the contents of /etc/julian.txt. To do this, a MySQL server must be installed (apt install mysql-server) and a user created that has all privileges on a database (this can be any database, for example’s sake, I’ll be using the mysql database).

When creating the user, the authentication type must be set to mysql_native_password due to the mysqli driver not supporting the latest default authentication method. If it is not, adminer will indicate to the user that it cannot authenticate and output a MySQL error.

To setup a user this way, the following command should be executed in the MySQL CLI:

Now that a new user is setup (in this case, jeff), the local_infile variable on the user’s MySQL server needs to be enabled. To do this, execute:

The setting can then be confirmed by running:

If the setting was successfully enabled, the following output will be displayed:

Now that the attacker’s MySQL server is setup, navigating to /adminer.php and filling in the connection details will force adminer to connect back to the attacker, where they will then be viewing their own database server in the web app.

From here, files local to ReadMe can be exfiltrated to the attacker using the local infile syntax. First, the user must create a new table to save the data into. For this example, I have created a table named exploit with a single text column.

After creating the table, going to the SQL command page and executing the following query will populate the exploit table with the contents of /etc/julian.txt:

After executing this query, clicking “select” to the left of the exploit table will reveal a row for each line in the file, which reveals the password for the julian account: 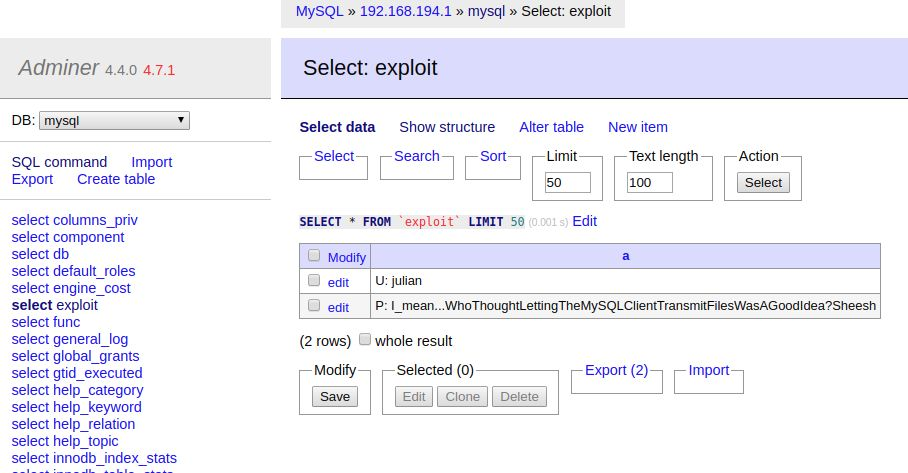 With the password recovered, the user can then login via SSH as julian using the password and get the user flag from /home/julian/user.txt

After authenticating as julian, the user will be able to see the contents of tatham’s home directory. Within this directory are two files:

There are two methods that can be used to decode the payload and recover the password.

First, place the contents of payload.bin into the placeholder of poc.c and compile with protections disabled:

Next, load poc into gdb (gdb ./poc) and disassemble the main function to find the point which the shellcode is called by running disas main: 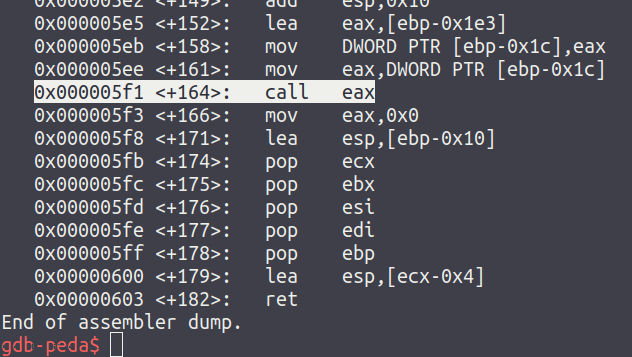 After confirming the offset, place a breakpoint (b *main+164) and then run the executable. Once the breakpoint is hit, stepping into the call eax instruction will then leave the user at the point of the xorfuscator decoder stub being executed: 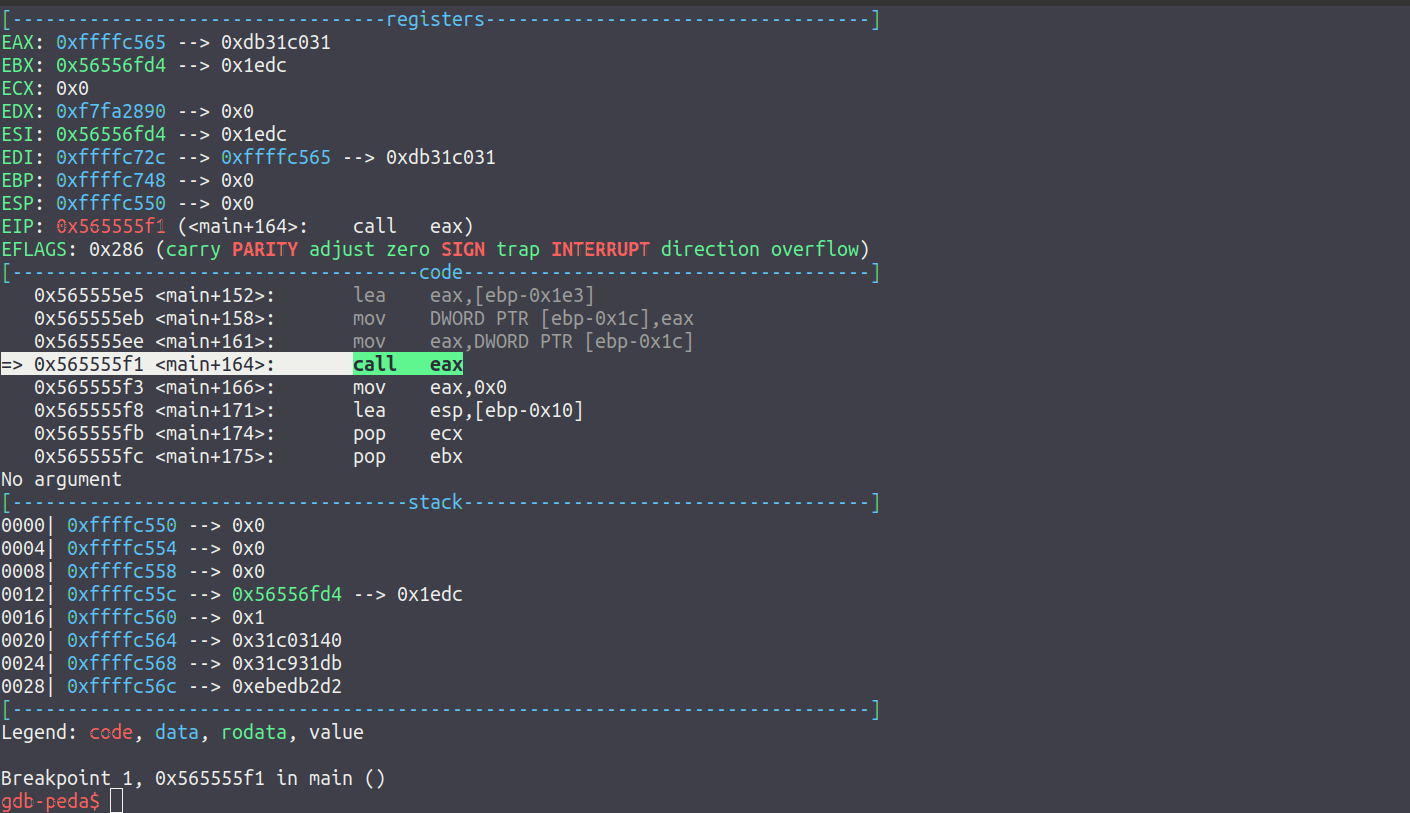 Once here, viewing the next 15 instructions that are to be executed (x/15i $pc) will reveal the address that the decoded payload can be found at after the stub has finished (in this case, 0xffffc595, this value will change every time due to ASLR):

A breakpoint should be placed here (b *0xffffc595) and once it is hit, after continuing execution, should be stepped into. Now EIP will be pointing at the original shellcode that has been decoded in place.

Continuing to execute from this point will result in the password not being revealed, as the original payload contains two key mistakes that need to be fixed if the user wishes to reveal it via execution.

Examining the recovered code will show 64 bytes being repeatedly loaded into the eax register, even though the rest of the code is trying to work with a value on the stack. This should make it clear that the lea eax instructions should actually be push instructions.

In addition to this, the decoder loop is exiting after the first iteration as a jz instruction is being used as opposed to a jnz.

A copy of the working and broken payloads can be found at the end of this post.

After reconstructing the NASM file to represent something functionally equivalent to the original code (see sample at end of this post), it can be compiled by running (assuming the code is in a file named fixed.nasm):

The previous command will now have built a file named a.out which is the fixed executable, running this in gdb will make execution pause when it reaches the interrupts at the end of the file, and the base64 encoded password will be visible on the stack: 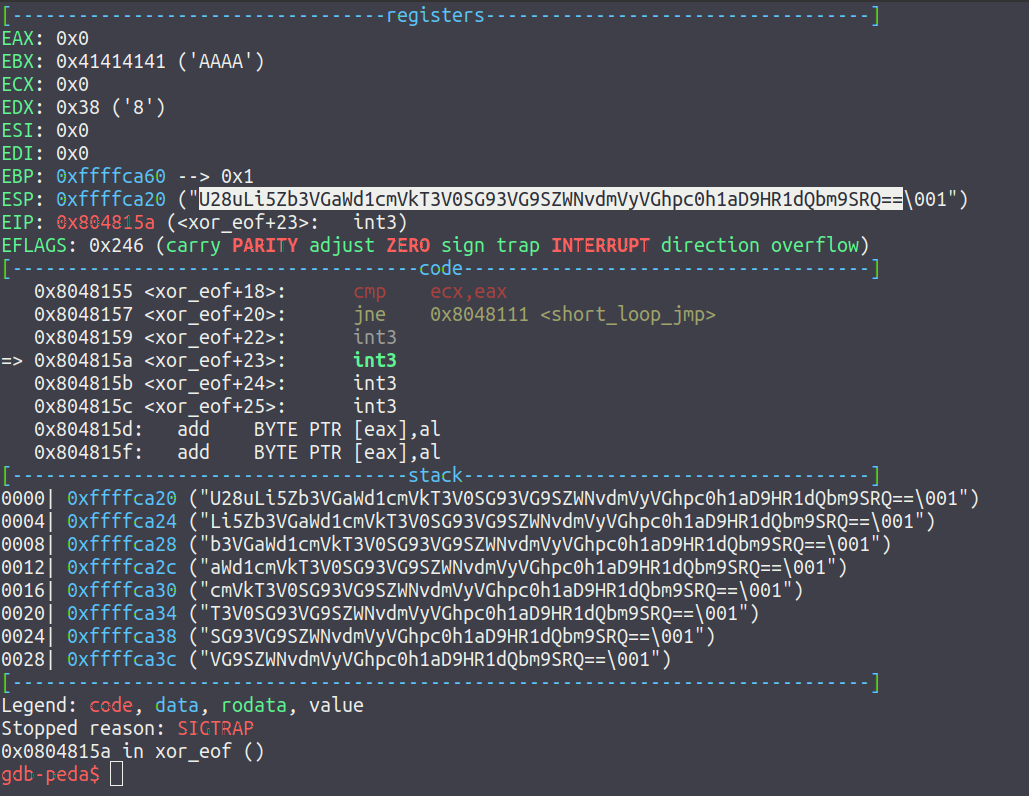 Decoding this value will reveal the password for the tatham account, which if the user logs into will be able to run any command as root using sudo, and will be able to then obtain the root flag.

The alternative to recovering the decoded payload using gdb is to do it manually. Due to the relatively small size of the payload, this is doable and may make the process slightly easier if the encoding method can be identified.

The encoder used as well as a script that contains the decoder stub is publicly documented here: https://rastating.github.io/creating-a-custom-shellcode-encoder/

By first removing the decoder stub from the contents of payload.bin, the user will be left with only the encoded payload. The user can then work through the remaining values and XOR each pair with the byte that precedes it as per the illustration on the aforementioned page: 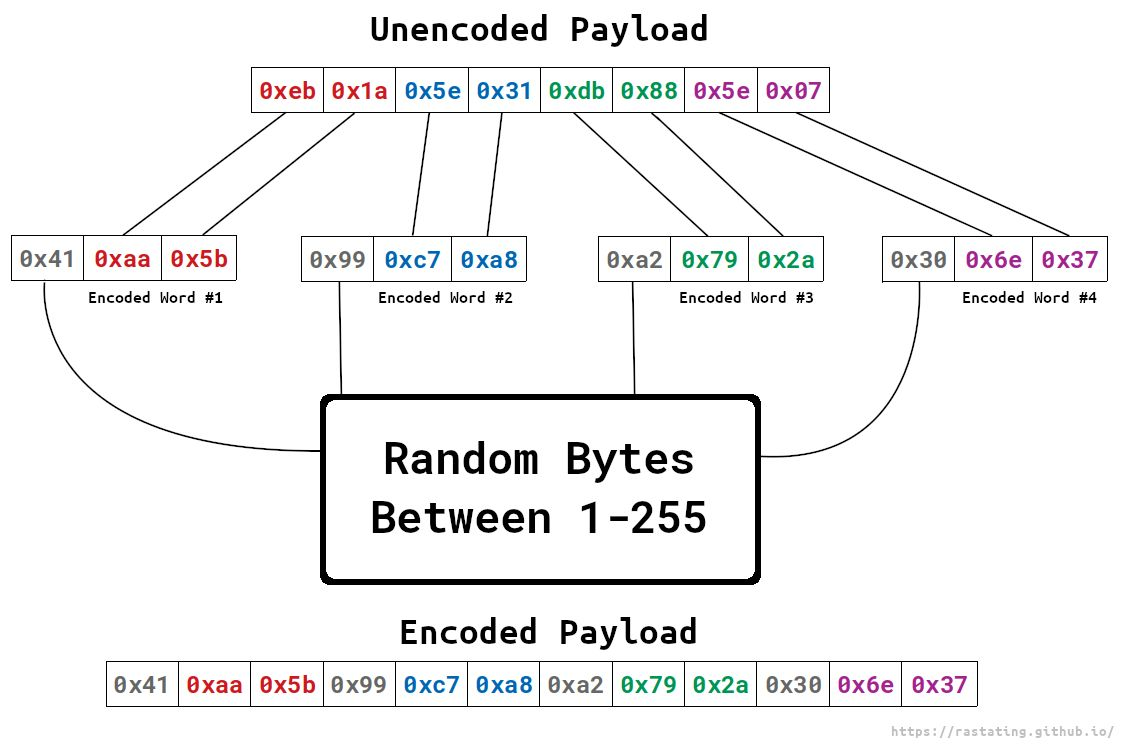 After recovering the original hexadecimal bytes, the ASM code can be recovered using ndisasm, as per below:

After recovering the original payload, the user can either fix it as per the explanation in method 1, or they can try to analyse what is happening in the loop which is XORing the 64 encoded bytes on the stack against the below key and shifting the ASCII values negatively one position:

An illustration of the decoding process can be viewed on CyberChef here: https://gchq.github.io/CyberChef/#recipe=From_Hex(‘Space’)XOR(%7B’option’:’UTF8’,’string’:’AAAAAAAADAAAAAAAAAAAEAAA4AAADAAABAAAEAAAEAAAFAAAAAAAAAAAAAAAAAAA’%7D,’Standard’,false)ROT47(-1)From_Base64(‘A-Za-z0-9%2B/%3D’,true)&input=MTcgNzIgNzggMzcgMGMgMmIgNzcgMWEgMjcgNzUgMTYgMDkgMjMgMTkgMjQgNzMgMjUgMmYgMTYgMmQgMTAgNzUgMTYgNzAgNjAgMDkgN2IgNzUgMTMgMDkgN2IgMTUgMTkgMTkgMGUgMzYgMjAgMmYgMTYgM2IgMTIgMDkgMjggMzAgMjIgNzAgMjggNzMgMjMgMDQgN2IgMDggMTIgNzMgMjQgMTMgMjIgMmYgN2IgMTUgMTIgMTMgN2YgN2Y

At this point, they can use the recovered password to login as tatham and retrieve the root flag using sudo as per method 1.