Despite a lot of people claiming that mining cryptocurrency is dead and no longer profitable, it is still a fun thing to participate with and so I picked up a Zeusminer Blizzard (pictured below) on eBay to use with my Raspberry Pi to mine some Dogecoin. 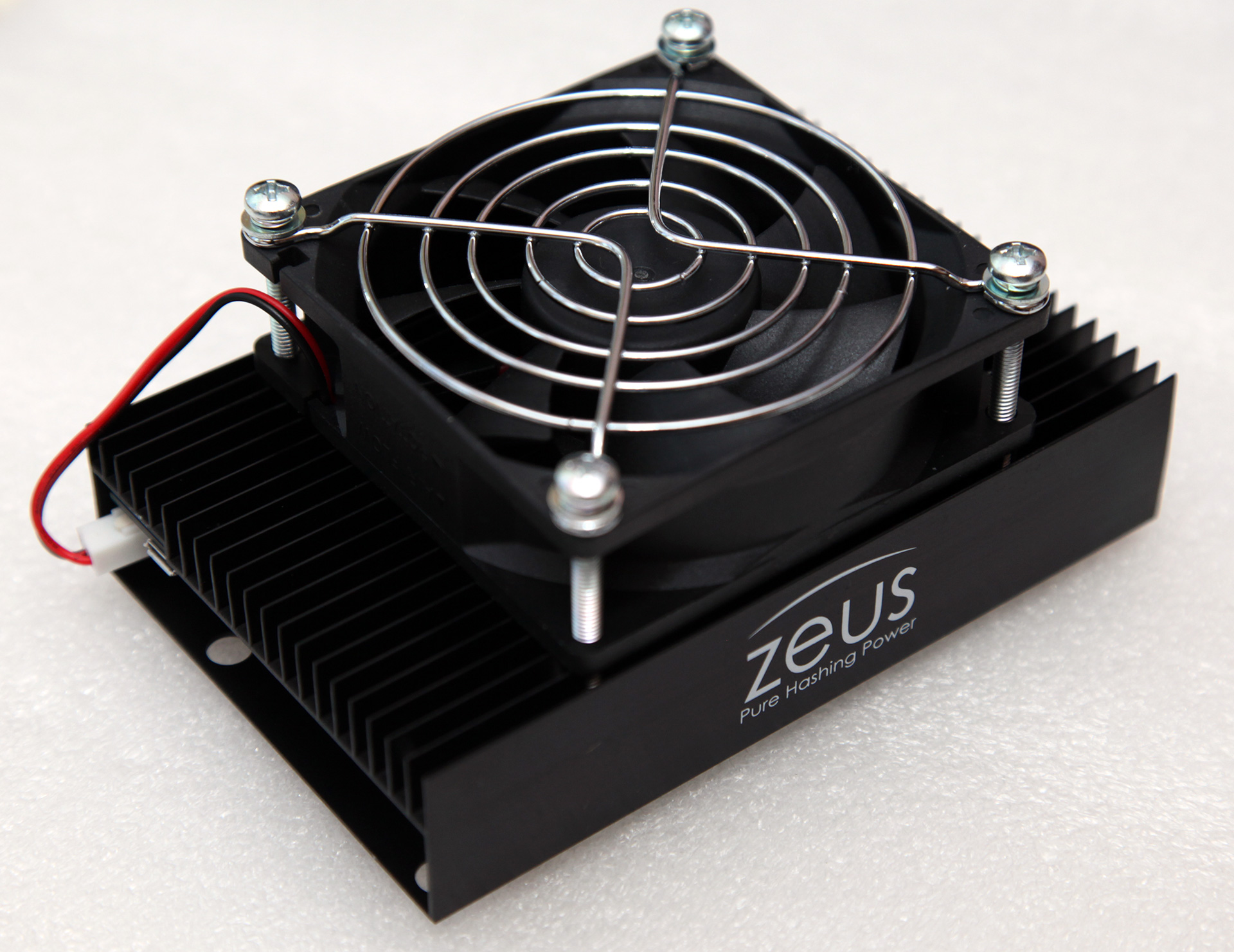 If you’ve made it to this guide, I’m going to assume you’re relatively familiar with mining and what devices such as the Zeusminer Blizzard are for and are simply wanting to get it working, so I’ll skip over that introduction and get straight to how to set up this miner using a Raspberry Pi.

Setting up the prerequisites

The first thing you’ll need to do is install Raspbian on to your Raspberry Pi. If you have not done this before head over to http://www.raspberrypi.org/documentation/installation/installing-images/ for information on how to do this. I highly recommend using NOOBS to do this; it will make your life a lot easier!

Once Raspbian is setup, boot into the command line and plug a keyboard and your miner into the Pi and start by first ensuring that your package list is up to date and that you have the latest versions of the installed packages with this command:

Once the update and upgrade is finished we need to ensure that we have the latest kernel and firmware updates. Why you ask? There was previously a bug that would prevent some USB devices being listed in /dev. In the context of this guide, it may prevent our miner showing up as /dev/ttyUSB0 and thus result in bfgminer not being able to find the device.

To perform the updates, enter the following command:

Now restart your Raspberry Pi using the following command to ensure the latest updates are in use:

Next, we’ll need to install a number of packages to allow us to clone the bfgminer source code, configure and compile it. Issue the following command to install the required dependencies:

Now we’re ready to grab the source code! I’m currently running a fork by Darkwinde that I know to be working with the Zeusminer Blizzards. If you want to use a more recent fork I cannot guarantee compatibility or that the launch parameters will be the same.

To clone the source code to your home directory, run this command:

Next up we need to build bfgminer, which can take quite some time, so probably best to grab a coffee or something to eat whilst you wait. Start by entering the bfgminer directory that was just created by the cloning process and run autogen.sh:

Next, ensure the configuration script is executable and run it.

IMPORTANT: the CFLAGS value contains the capital letter O, not the number zero.

And finish up with:

Setting up a bfgminer configuration and executing

We’re almost there now! If you haven’t already, plug in your miner and ensure it is being recognised by running:

The output from this should look something akin to the below:

If you can see the device I have as device 004 then we’re good to go. If not, try another USB cable or power supply to the miner to ensure the connection is OK and that sufficient power is being provided.

The --zeus-cc parameter specifies the number of chips that are available in our miner; in the case of the blizzard this is 6, if you’re using a different model you’ll need to ensure you enter the correct number.

And that’s it, you should now be successfully mining!

If bfgminer fails to find your device, run the following command to find possible devices:

If you have more entries, try replacing ttyUSB0 with the appropriate number. If this returns no results then it means Raspbian is failing to pickup your device, which is why we installed the latest kernel and firmware updates earlier. If you skipped that step and are having this problem please be sure to go back and do it.

Below are a few extra things you may be interested in doing, but are not required in order to run bfgminer.

If you want to run bfgminer when your Raspberry Pi boots up in case of a power cut or any other event that would cause it to reboot, first install screen:

This program, if you’re not familiar with it, will allow us to run bfgminer on a separate screen and detach it and reattach it as we please.

Next, we’re going to use crontab to setup our bootup command, to do this run:

Make sure you do not sudo this command, as if you do you’ll be editing the tasks to be run by root, not pi. Now, add the following to the bottom of the file:

Now when your Raspberry Pi reboots, bfgminer will be launched in a screen that you can reattach to at any time by running:

To detach from that screen again, simply press CTRL + A + D.

If you want to run multiple Zeusminers, simply replace -S zeus:/dev/ttyUSB0 with -S zeus:all and bfgminer will search for all available Zeusminers for you. This is also a possible solution if you’re struggling to identify the device to pass in.

If you are intending to run bfgminer manually rather than on boot in the background, it may be useful to create a configuration file rather than issuing the full command each time. To do this, press the S key when on the main bfgminer screen pictured below. 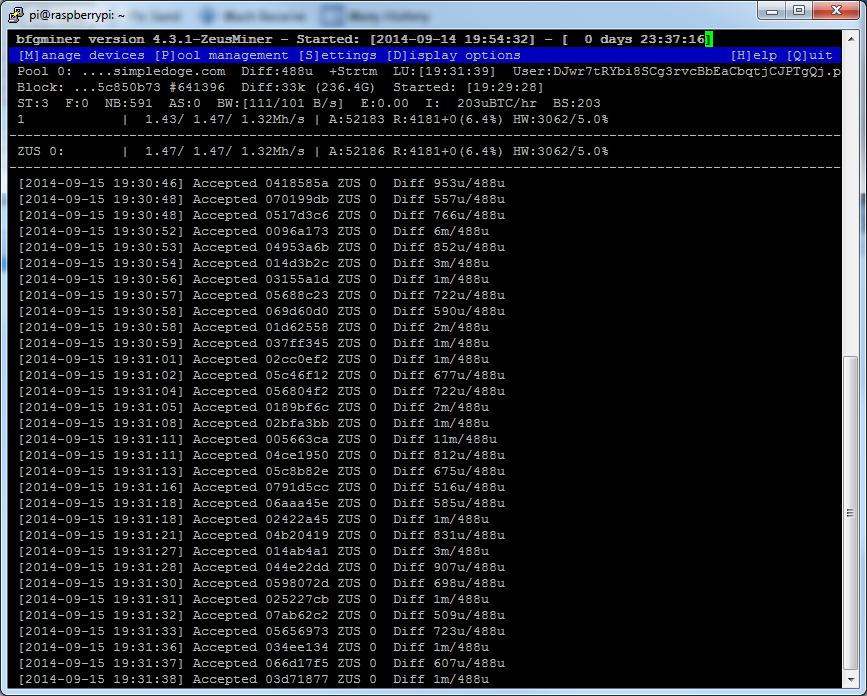 Now, you’ll be on the settings screen, as per the screenshot below. 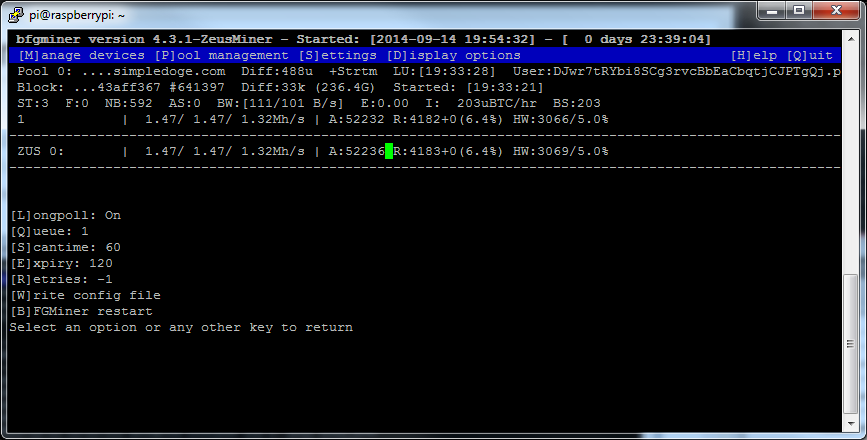 Press the W key on your keyboard and enter the path where you wish to save your configuration file to.

Now when you want to launch bfgminer using these settings you can do so by running: