After hearing that someone had created a Mr. Robot themed CTF, I needed to see this. As the author describes, there isn’t anything overly difficult with this VM, but it is enjoyable nether the less.

Based on the show, Mr. Robot.

This VM has three keys hidden in different locations. Your goal is to find all three. Each key is progressively difficult to find.

The VM isn’t too difficult. There isn’t any advanced exploitation or reverse engineering. The level is considered beginner-intermediate.

The VM is available from https://www.vulnhub.com/entry/mr-robot-1,151/

The VM is configured to use DHCP to retrieve an IP address, so the first thing I did was identify what IP address it had been assigned, using Nmap by running nmap -sP 192.168.1.1/24, which yielded a number of hosts, including the VM:

The results indicated that there was a web server running and that port 22 was open, but with no service running behind it:

As the service discovery only yielded a web server, the next step I took was to start looking into what was being hosted.

This was tainted, slightly, in that when importing the appliance into Virtual Box, it indicated that there is a WordPress installation; so I knew ahead of time what to expect… doh! 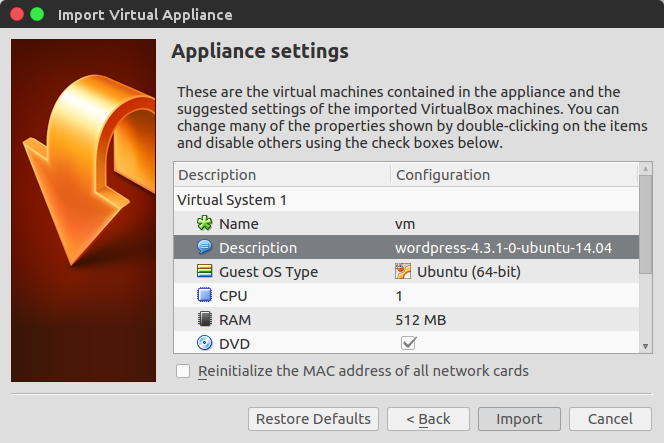 Ignoring the spoiler that I ran into, I proceeded to head over to http://192.168.1.100/ to find a VERY cool Mr. Robot themed web app which mimics a terminal with various commands available for use. None of the information on the website is directly relevant to the CTF, but it’s worth playing around with. 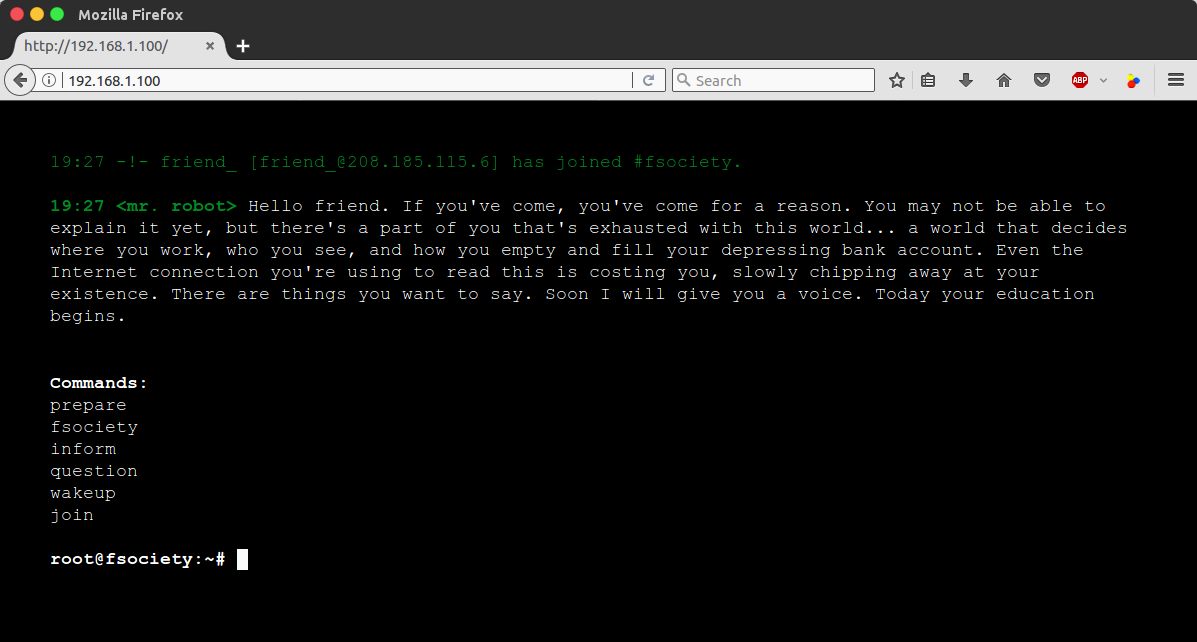 Looking at the source code of the landing page, there was nothing referencing WordPress anywhere, but I made the assumption it was there somewhere, given that I had seen it in the appliance description. With that in mind, I navigated to http://192.168.1.100/readme.html to see if the WordPress read me was there, lo and behold, it was! 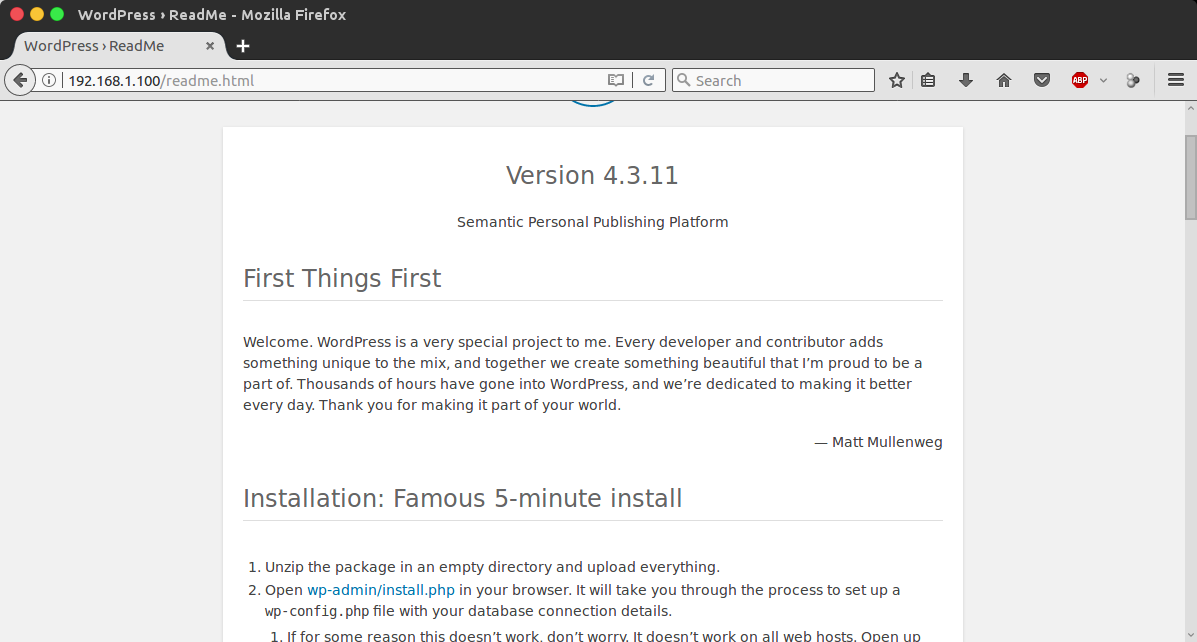 At this point, it was pretty safe to assume that this would be where my initial access would be gained, given the mass amount of vulnerabilities that exist within the WordPress ecosystem. So, my next step was to fire up WPScan and see what vulnerable plugins and themes are installed using: wpscan --url http://192.168.1.100/ --enumerate vp,vt,u

There was one result in particular which caught my interest, however, which was the outdated version of the All in One Migration plugin. The version of the plugin was one which I was quite familiar with, as I have previously written a Metasploit Module and a WordPress Exploit Framework Module for an unauthenticated database export vulnerability that exists within this version.

As this vulnerability lets you get a full dump of the database, I loaded up WordPress Exploit Framework and executed the module against the VM:

Unfortunately, attempting to unzip this yielded an error and the file size was 1kb. As the plugin was seemingly failing to produce the export, I dropped this and moved on.

As no reliable WordPress vulnerabilities showed up to the party, I fell back to more information gathering and used Nikto (nikto -host 192.168.1.100) to do a quick scan of the web server.

Unfortunately, Nikto didn’t uncover much either, other than a potential separate admin area:

Visiting this page just resulted in a refresh loop and seemed to provide nothing of use.

Next, I decided to take a look at the robots.txt file that WPScan had previously identified, to see if there is anything interesting; to my surprise, there was!

In addition to revealing the first key when checking the robots file, a word list was also revealed (fsocity.dic). This led me to believe that the password to one of the WordPress accounts is going to be inside this file.

As WPScan failed to enumerate any users, I began to brute force manually some of the names from the show, in an attempt to find a valid username (a bit primitive, but it worked!). When resetting a password in WordPress, if you enter an invalid username, it is as kind enough to let you know that by spewing out the message:

Land on a valid username, and it will send the password reset e-mail. Or, in the case of this CTF, it will spew out an error message indicating the e-mail couldn’t be sent, but either way, we get the desired result: confirmation.

Now that I knew the name of one of the accounts, I went back to the word list previously obtained, and ensured there were no duplicates by running cat fsocity.dic | sort -u > fsocity-u.dic and then passed this to WPScan to brute force the account using wpscan -u 192.168.1.100 --username elliot --wordlist /root/fsocity-u.dic

To make sure I hadn’t stumbled upon any kind of false-positive, I logged in to the WordPress admin panel using these credentials to find the elliot user is a full administrator, with the ability to install plugins.

As I now had admin credentials for WordPress, I was able to get a shell using the admin_shell_upload module in WordPress Exploit Framework:

At this point, I spent a lot of time fishing around the htdocs directory, but found nothing. So I headed to the/home/ directory, where there was a single home directory for a user named robot; which included the second key!

After finding this, I did a reverse lookup of the hash, to find that the password for the robot account is abcdefghijklmnopqrstuvwxyz (yay for weak passwords).

Now that I had the credentials for the robot account, I dropped into a TTY shell, and switched to the robot user to access the second key!

I now knew the naming pattern of the key files (i.e. key-*-of-3.txt), so I thought I’d see if a search for this pattern would return anything by running find / -name 'key-*-of-3.txt' 2>/dev/null, which unfortunately returned nothing, other than the second key file within the robot home directory:

At this point, it became clear I’m going to have to get root to get the third and final key. To start with, I checked what version of the kernel the machine is using, to find it is 3.13.0-55:

With this information, I headed over to https://www.exploit-db.com/ and looked for some privilege escalation exploits that I could use. I tried both the OFS [CVE-2015-1328] and recvmsg [CVE-2014-0038] exploits, but both failed to get root.

After these failed attempts, I recalled seeing an Nmap shell on a cheat sheet I use for TTY shells (https://netsec.ws/?p=337), so I decided to see if Nmap is installed on the machine and to my surprise, it was!

Not only is it installed, but it is also owned by root, and has the SUID flag set (meaning that when it is executed, it will run as if being executed by the owner). This combined with the fact older versions of Nmap will let us drop into a shell, means I could now get root access via Nmap:

Now that I had root access, I ran the command I had previously used to try and find all files that match the naming pattern of the key files (find / -name 'key-*-of-3.txt' 2>/dev/null), and voila!

The third and final key exists within /root/key-3-of-3.txt