Over the past few days I decided to take a step back from hacking together stuff with the Arduino and to instead take the time to read up more on the fundamentals of electronics that I imagined everyone should be aware of; that being how voltage, current and resistance work in a circuit.

If you’re new to electronics, like myself, this may be a rather daunting thing to understand, but hopefully this introduction will clear up any confusion and provide you with the required knowledge.

Why do we need to know about voltage, current and resistance?

The answer to this question is – because these are the factors which allow the electricity to move through a circuit.

Electricity is delivered through a circuit by the movement of free electrons and like most things that move, there has to be a force which makes it move. In terms of electronics, this force is known as the voltage.

The result of applying that force to the electrons is that they begin to move. The number of which pass through a specific point per second is the effect of the force being applied, which we refer to as the current.

Anything in the circuit which limits how many electrons can pass through (i.e. resistors) is known as resistance. (hopefully that one is rather self explanatory!)

There is more to these three components than just this, but to summarise:

If voltage is the force which moves the electrons, why can’t we use that to determine the speed?

This is a point I was dwelling on for quite some time. I kept wanting to know why, if a higher voltage meant the electrons would move faster, that we needed to know the current as well, as surely one would be directly proportional to the other, right? Wrong!

When discussing this topic with a friend of mine, he used an analogy which I found very useful in understanding the answer to this question; that being comparing it to moving a box.

If we have a box that we want to push to a different room to the one it is in, there are two factors which define how fast it will get there:

Who is Ohm and what is this law of his!?

Ohm is Georg Ohm, a German physicist who in 1827 published an equation which would allow people to calculate the voltage, current and resistance between two points in a circuit by having any two of the given elements. This equation would later go on to be known as “Ohm’s law”.

Before explaining the equation, we should take note of the units in which we measure voltage, current and resistance:

The equation uses all three of these measurements, and is as follows:

In order to explain and illustrate how Ohm’s law works and how current and voltage is affected in different types of circuits, I am going to use a free online tool called Circuit Lab (https://www.circuitlab.com/). I can’t express how useful this tool is when it comes to experimenting with this calculation and sketching out circuit ideas. It allows for you to create a circuit in the online editor and see what the voltage and current is at any given point in the circuit (essentially simulating the functionality of a Multimeter). It is capable of much more than just this, however for the purpose of this topic it’s the main feature we are interested in!

Below we have a simple circuit (Click Here to View on CircuitLab) which consists of a 5 V power source and a 100 ohm resistor. To find out the current between the power source and the resistor we use Ohm’s law, that being I = V / R, or in terms of this circuit 0.05 = 5 / 100, meaning that the current is a total of 50 milliamps (abbreviated as mA).

If you want to view this interactively click the link above to view the circuit on CircuitLab and click Run > DC Simulation, in the panel to the top left you will see the current and voltage. To view the voltage and current at other points in the circuit simply just click on the points to view them in the expression window. 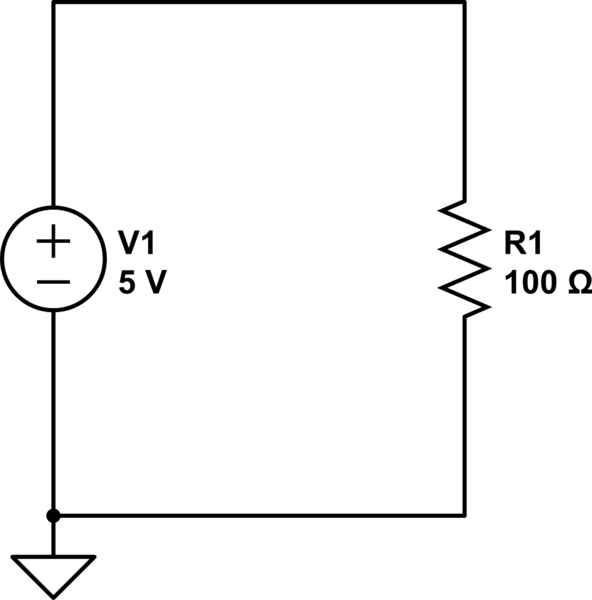 In this example we will expand on example 1 and add a second resistor so that we can see how the voltage drops if we measure it after the first resistor. To access this example on CircuitLab, Click This Link.

It’s important to remember, in a series circuit like the one above, the current will be the same throughout the entire circuit and the only change we see is in the voltage. In parallel circuits the opposite happens, and the current is split as opposed to the voltage.

As mentioned in the previous paragraph, in parallel circuits the current is split between the numerous branches, with the most current going to those with the least resistance. In the example below (which can be viewed on CircuitLab Here) we have two resistors in parallel, one at 200 ohms and one at 100 ohms. 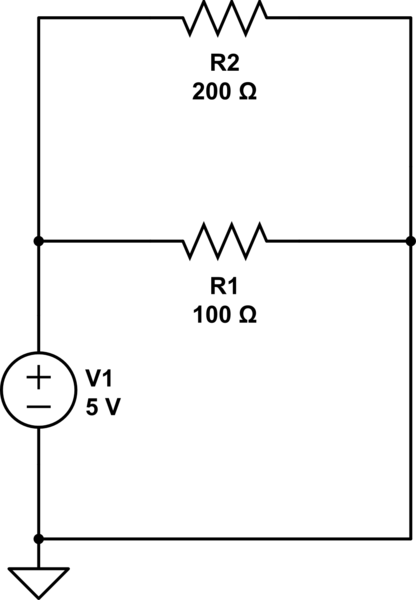 These are the points that you should be taking away from reading this:

I’d also recommend bookmarking This Calculator. Although the maths behind Ohm’s law isn’t particularly complicated, it just quickens things up and reduces the mistakes you can potentially make!